Why aren't the foundation deficiencies cleaned up first? 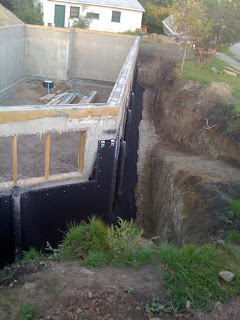 When I went to check to see if the foundation passed inspection, I was hoping to see the deficiencies on the platon installation cleaned up.  Nope. But the weeping tile guys decided to put a landscape fabric over the rocks at the base of the footing instead.  What is going on?

I don't even have a quote for this work!  I had passed on a sketch for this idea in lieu of putting a sock on the weeping tile [which they did not do as I hoped]...  The fabric will hopefully stop the silt from clogging the little holes in the weeping tile.

I hope they connected the weeping tile to the T-connection before the covered it all up!  [I'll have to check from the inside, I guess...]