The framer started today!  Well, not at the crack of 8am as expected... It seems that the 2x4 studs were missing in the delivery of materials. Apparently, the supplier thought this was a "regular basement and joists would just rest on the concrete wall.  So, a couple hours of delay occurred as the framer waited for the studs to show up on site.

Then the framer didn't read the drawings and placed studs at 16" on centre, rather than 24" as shown. Great. 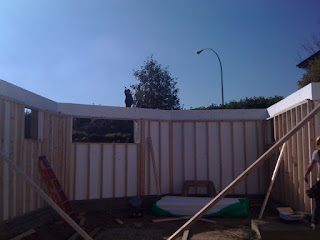 And well, I encountered my first drawing error as a wall was shown as framed into a window. How in the world did I miss that?  Sheesh, what a rookie mistake.