Rebar is being placed in the footing! 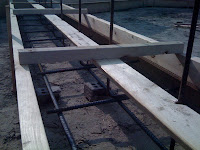 The cribber has placed the rebar in the formwork of the footing. In chatting with him, he stated that the rebar I specified [15M & 10M] is far more heavy-duty than standard homes, that shave off as much as possible in costs. He also mentioned typical homebuilders don't put keyways in the top of the footing for the foundation wall to form into. Nor would they specify a waterstop in this keyway, for an extra $670 of material. They would only do this in "high-end" homes. Wow. I just thought these were standard practices. No wonder there are lots of houses with cracking and leaky basement walls!
Posted by Shafraaz at 9:08 PM