Story of the salvaged tub! 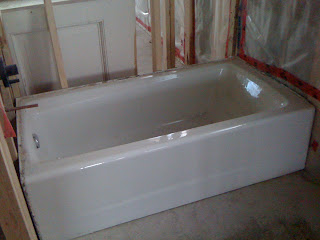 I was able to salvage this awesome, 200 kg. Kohler cast-iron tub! Other than the old grout bits around the top, it looks brand new! It has great molded lines and even a sloped end for relaxing in the bath.

My friend Sonny and I spent one stormy night last summer ripping a bunch of stuff out a handsome, old home slated for demolition. It was a wicked thunderstorm- and it was kinda' creepy being in an old house, with no power- with flashlights only- trying to get things out of the place. That was the first time it really struck me of how much waste we create for no better reason than wanting something new.

We bashed the walls around the tub and pry'd it out. It took four people to carry it out of there- we had to wait until the next day to solicit help from the contractor. And it took four people to carry it into our place, after we dug it out of the snow bank where it spent most of the winter. I don't know how the plumber jostled into place. So, hopefully, we get some great further use out of it. And I won't reveal the other cool stuff we salvaged until later! Stay tuned!
Posted by Shafraaz at 9:53 PM