There was an interesting article on CBC news the other day.  It was about a house that one neighbour thought to be too high and that blocked his view. That storey has me reflecting on the process we went through to design our house and have it approved by the City and with the blessing of our neighbours.

It is with great neighbours and, the understanding of the land use bylaw, that has allowed us to build our house. Essentially it boils down to this:

1. We are building in a mature neighbourhood overlay, which limits heights to 2.5 storeys.  Now the city reviews this height as if you were building a pitched roof- where the height is measured half way up the angle of the roof!  Theoretically, you can build a house that would be about 34 to 36 feet high!  Their rules are more strict for flat or shed roofs. You can review the bylaw by clicking here.

We limited the height of our house by building a "flat roof," and had to go to the Subdivision and Development Appeal Board [SDAB] to argue that it would actually be lower than a pitched/gabled roof house.  We could have built a 2.5 storey house with a gabled roof and NOT have to go through any of this extraordinary approval process. Luckily, we had the support of a majority of our immediate neighbours too! We had to seek the blessing of all our neighbours within 60m of our house- and we went even further, canvassing the entire block of people around our house. We even presented our design to the Beverly Heights Community League. We were extremely pleased that two of our neighbours even came to our SDAB meeting and spoke in favour of our house proposal. 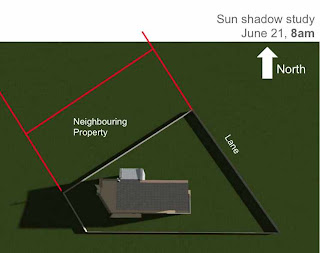 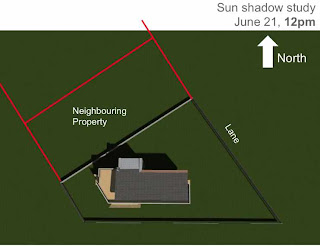 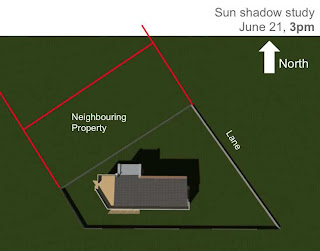 3. We are building higher- rather than wider.  We have a small building footprint- in order to conserve a large part of the lot for an edible garden and green space. We actually only use 20.8% of the site area, which includes the existing single car garage on site.  The land use bylaw allows you to use/build up to 40% of the site area when you include the garage!

4. Like many other houses on Ada Boulevard, we built the house in order to maximize our view to the river. Our house is the last [or first] house on Ada Boulevard- which is lined with houses of various stature and heights. We consider our house as one of the variations of houses along this lovely boulevard- some of them that take a "modern" design aesthetic.

We are grateful for the support of our neighbours and the Community League for helping us gain the approval to build! We hope to be good neighbours and we will endeavour to make a positive impact on the neighbourhood we will call home.
Posted by Shafraaz at 1:49 PM